This coastal town in Kerala, India, is too shy to betray any signs of its rich history or the important role it once played in world trade. 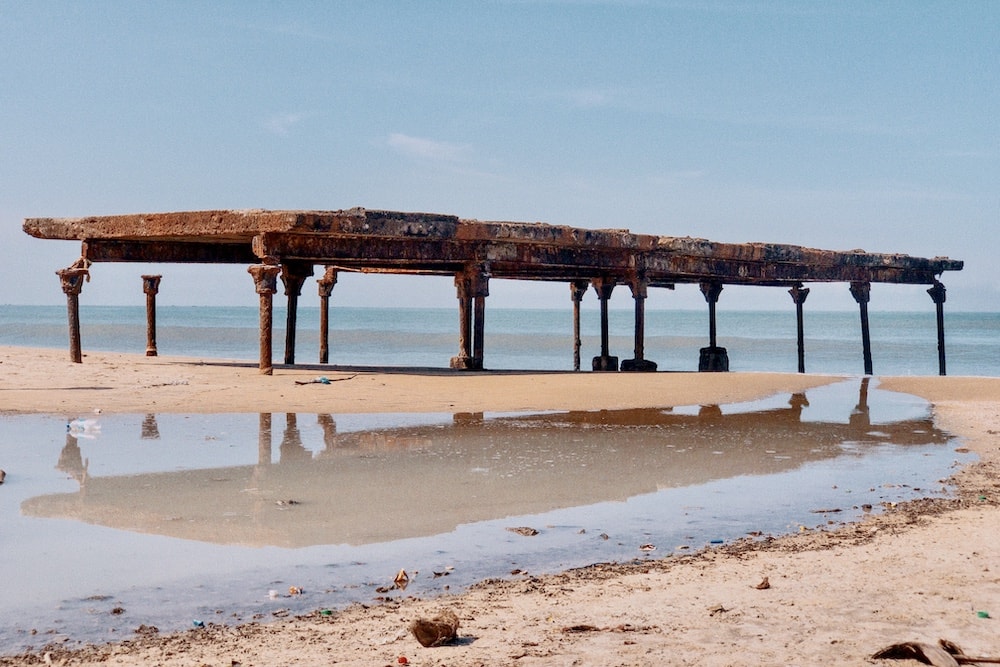 Much like the city itself, my journey to Kozhikode (pronounced koːɻikːoːɖ somewhat trickily) had a rustic feel to it. Kerala had just recovered from floods and the aftermath was visible everywhere: buildings dislodged from their foundations, structures that once peered over hills crumbled and made one with those very hills, ditches on the roads resembling deep gashes that promise to leave scars for years, and a constant reminder of the deluge hovering above in the form of dark rainclouds. The state had been undone, but not Kozhikode City which remained as intact as ever.

Radio blares from public speakers in the bus station at Kozhikode as I alight. This was a city which once enjoyed the title of one of India’s foremost ports; it used to be called Calicut during the height of its trading days1 thanks to foreign mispronunciation—the same reason why the Samoothiris ruling this place became the Zamorins—which was not undone despite the kingdom becoming part of Mysore briefly in the 1700s. The British eventually took over and the rest is history.

The people at the bus station are probably not thinking about any of this: it is late and their bus is yet to arrive. Frustration is in the air. Nearly all busses were late—I am unsure if this is commonplace or not. I watch as people await busses in queues even as the huge metallic vehicles themselves queue up waiting for a spot to park in and load a new set of passengers. As I roll my luggage out to the street in search of an auto I notice that the city is practically deserted. It was somewhere between 8 and 9 pm, but the city seemed to have gone to bed already. Finding an auto, though, was not hard.

The streets in Calicut, like practically everywhere else in Kerala, are narrow. The traffic here feels dense as a result of this despite nearby cities like Mysore and Bangalore being, in fact, denser. Traffic rules are missing except—pleasantly surprisingly—when it comes to pedestrians crossing roads on Zebra crossings: vehicles slow down to give way and pedestrians freely demand it. A walk around town showed me as much with it being impossible to cross any road had this simple rule not been observed.

If you are ever in Calicut, feel free to take an auto rickshaw to get around because commuting from one corner of the main part of the city to another often costs no more than ₹25–402. If you decide to venture out, though, a cheap taxi or car for hire would be better. I ended up using a bit of both—besides a lot of walking—to explore the city. While the infrastructure is poor, businesses seem to be booming. Roads towards the centre of the city are good—narrow, but good—while the farther you go from there the worse it gets.

With my hotel located near the shore I expected a room with a great view of the sea. I did get one although a second building promptly blocked it. Walking around the area it became clear that a view was nobody’s priority here and you simply did not get one unless you were right before the sea or your building was a lot taller than its neighbours e.g. the Coxswain luxury flats opposite the promenade. In short it boils down to a few criteria: if you can navigate the narrow streets, and if you can handle the dust, and if you can forget about things scenic because space is costly in Kerala, you will have a great time in Calicut.

Whenever I hear the word ‘promenade’ only three places come to mind: Pondicherry, facing the Bay of Bengal; Lisbon, facing the Tagus; and Colombo, facing the Laccadive sea. The promenade in Calicut gave me a bit of déjà vu because it resembles Colombo. Arguably the most apt description of it is that it looks like a smaller version of Colombo’s main seaside road (the one China owns practically in full). It has an area with low-lying buildings towards the South—like Colombo—and an area with high-rises up north—but the skyscrapers are fewer in number. Even the rest of the town and its roads bring back memories of Colombo. It is hard to imagine that merely similar geographical locations3 can bring about such stark similarities.

The region near the beach smells unsurprisingly like fish. The beach itself is a thin belt of sand that can be discounted easily, but the park and kids play areas constructed along the promenade give the whole place a certain charm. I made the mistake of not wearing a cap and found out the hard way just how unforgiving the sun is here. Perhaps it was just my luck that no shops—no cafes, juice bars, burger joints, or even chains like KFC and Dominoes—were open even near 10 in the morning for me to buy some refreshments. This baffled my driver too later in the day and he could not think why they were not open that late in the day. (It was not a holiday and these shops, I noticed that same evening, were open; so this remains an unsolved mystery.)

The park along the promenade was active with morning walkers and every hundred metres or so was an oblique coconut tree bending towards the sea, a picture associated strongly with coastal Kerala. Municipal workers had done a good job of keeping the place clean although the locals, from what I saw, helped little: three people littered in a span of 15 minutes and someone had set some garbage on fire4 right on the beach.

One of my absolute favourite sights in Calicut was that of eagles circling above a group of fishermen, waiting to dive in and snatch some fish for themselves. I lost myself before this sight for a good twenty minutes: the eagles flew unusually close to ground, with no heed for us humans below, and every minute a handful of eagles would take turns diving down swiftly to try in vain to grab some fish. Perhaps some seagulls could volunteer to teach them a thing or two.

Civic sense is not the only thing in shambles around here; a pair of old, 18th century piers lie in such a condition that, first, they barely resemble a pier and second, they look more like modern art installation floating a stone’s throw away from the shore. But once you realise that was a pier—there is a small board announcing as much—you can construct the entire structure based on its remnants and realise what a beautiful thing it must have been back in its day.

Its day was in the 1870s when Calicut was still a port that mattered. Somewhere along the way the city lost its importance and continues to exist as a shell of its past. I blame the officials in charge of improving the city’s infrastructure and culture. While nothing more than a simple slab of white granite proclaims that ‘Vasco de Gama landed here … in 1498’ in Kappad beach5, the other end of this story, in Lisbon, from where Vasco da Gamma set sail to India for the first time ever, has a standalone tower built in commemoration (see Torre de Belem) that draws huge crowds to this day.

I could not visit the rest of Kozhikode but noticed several buildings peppered all over the city that were all but left to ruins. More attention needs to be paid to such places especially since they play such an important role in cataloguing world history, but also because they add to the beauty of the city today. 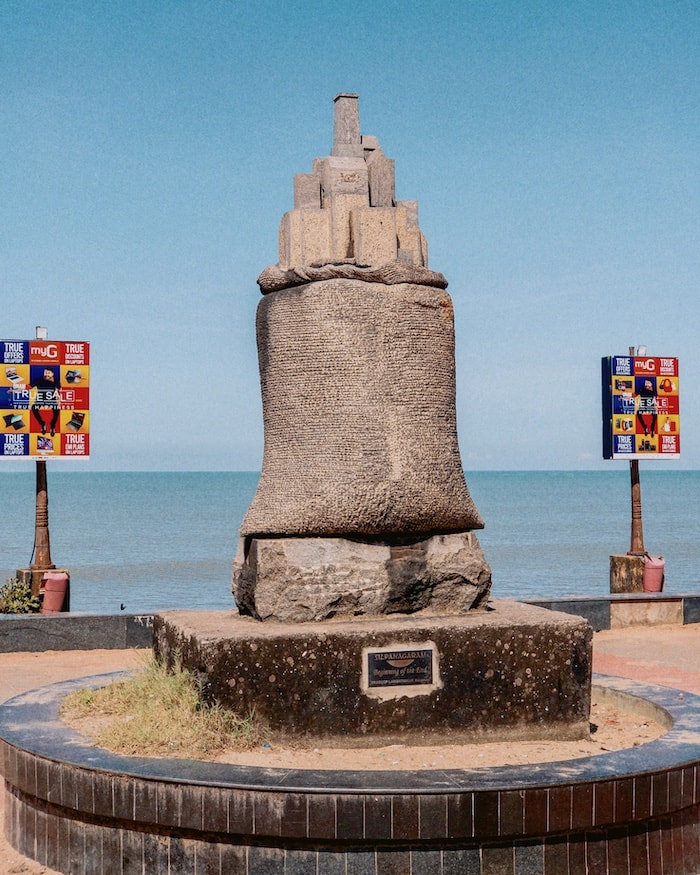 One of the more recent installations that caught my eye was a public art project called Silpanagaram where granite sculptors from around the country had made a number of artworks, each between six to ten feet in size, that had been laid along the promenade. One among those that especially caught my eye6 was called the ‘Beginning of the end’, by one Pradeep Lambathally (see picture above). Yet, it was hard to pick the best among them—they all had their own charm and would appeal to different tastes. It was a public project after all.

As I made my way around the city on foot a pink car caught my eye. I had seen the same type of car earlier and the third time I saw one I looked more closely: Pink patrol. It was a cop car painted all pink with female officers. Pink, female, stereotype? I think that link of thinking would be unnecessarily sensitive and pointless: this new venture by the Kerala police is noble in my opinion, pink or not. Their main task is to help women, kids and the physically challenged, whether to cross the road, find seats on a bus, rescue from eve-teasing or whatever else. They seemed active so, as an outsider, I got the picture that the programme was probably successful. 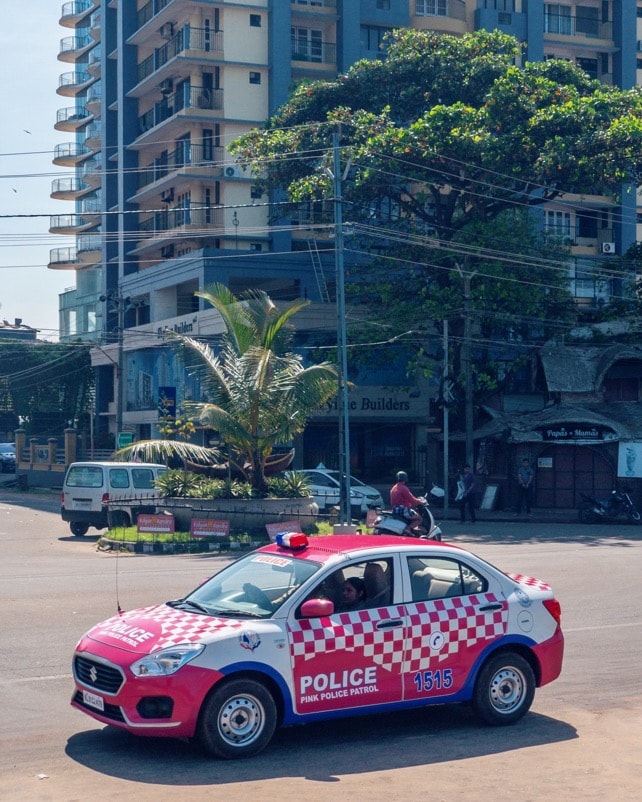 As I walked around town bright blue, pink and yellow raffles caught my eye: the ubiquitous lottery stalls of Kerala. This is one of only few states in India where running the lottery is legal. People sell in hordes and, judging by the papers littered all over town, people buy in large quantities too. And none of it made sense to me at first. For example, a lottery number is of six digits; that is ten possible digits (0–9) in each of six positions, or one-million possibilities7 in total. Your chances of winning the Kerala State Lottery is literally one-in-a-million.

However, closer inspection reveals this is actually a great thing. For one, individuals experience a feel-good effect regardless of the outcome, but there is more to this:

At this point I am unsure why all states in India do not simply adopt this. Nay, why not all countries around the world? Fraud is probably a serious concern and the main deterrent for many states. Kerala is small enough that logistics and policing can be handled at the ground level; other states would find this much harder to realise without grand schemes of fraud and money laundering stealing the show. Save Maharashtra and Madhya Pradesh, among states where gambling is allowed Kerala is probably the largest. 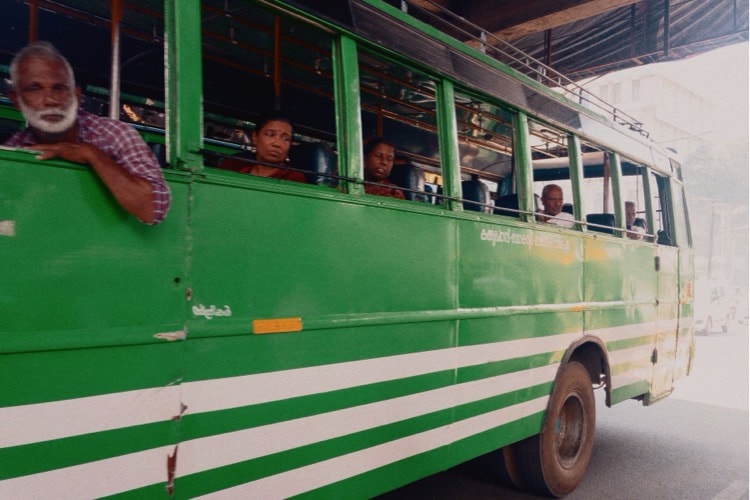 My time in Calicut was brief but eventful. Voices from the street outside were muffled as they streamed through my window. The white noise of ocean waves, which I would have preferred to the voices, was barely audible. Like the city itself, the sea here is calm and almost sleepy. Our civilisation has a deep irony in its celebration of localness and uniqueness I realise as I go to bed with Welcome to Nightvale playing next to me: no matter where you go, no matter how unique the places you visit are, no matter how much you celebrate them, you can almost always expect to get the same standard high-pressure shower in the bathroom to get you energised the following morning. When it comes to hotel stay, however local your room and cuisine may be, the bathroom stays unabashedly global.