A manifesto implementing the Dogme method to teaching, drawing inspiration from filmmaking and academia alike. 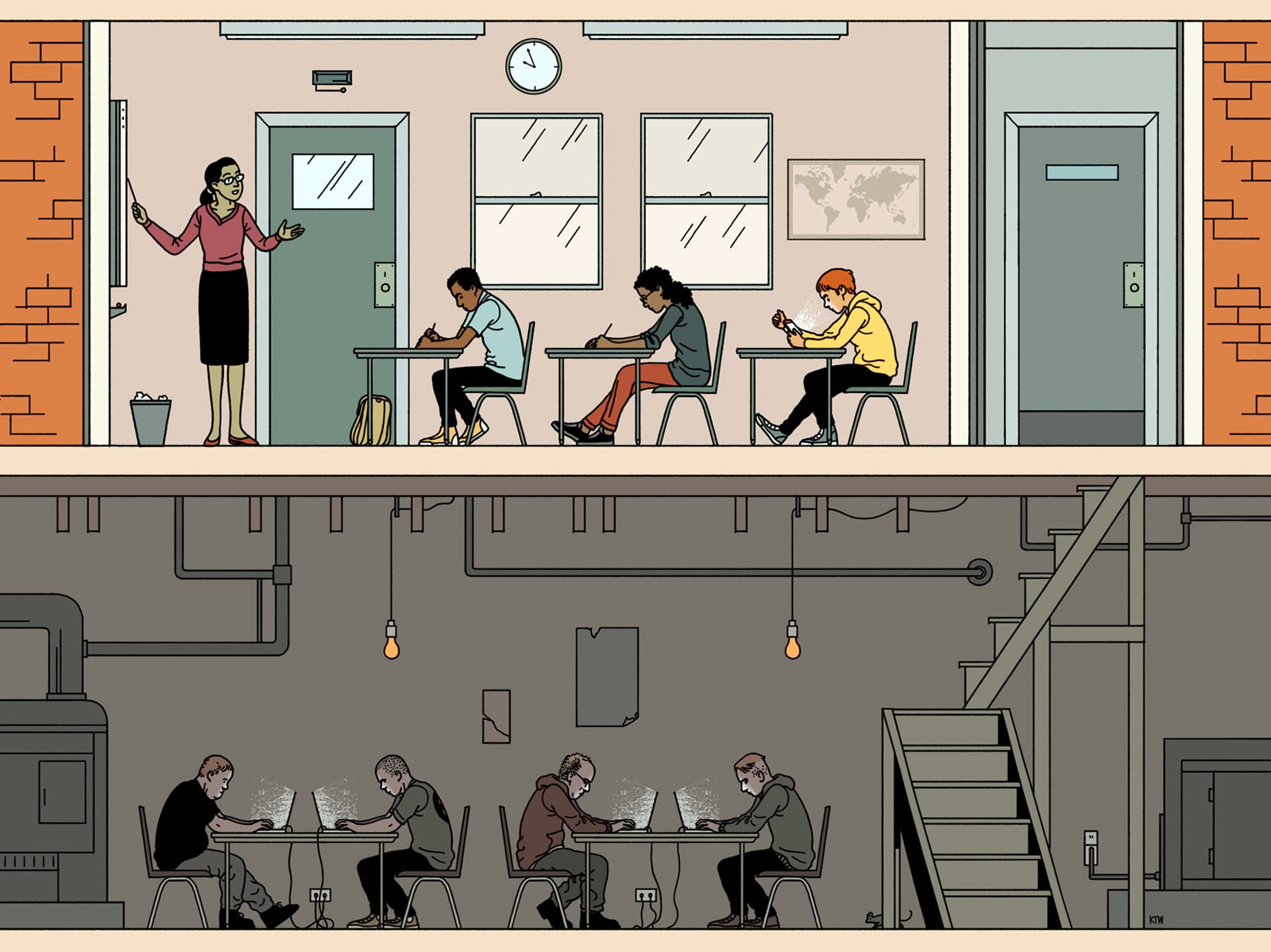 Teaching is arguably the most undervalued profession today. Few can appreciate its impacts, the effort it demands and the challenges it poses to the teacher—when done well. About a year ago, while trying to put what effective teaching is into crisp words, I turned to the dogma manifesto in filmmaking. It is a process I subscribe to (at least in part) and employ while making my own short films. Could it be applied to teaching? Would it even make sense?

Not long after, I found out that this had already been done by others back in the 90s albeit for narrow teaching requirements. And the method, in that context, drew lots of criticism, not all positive. However nobody seems to have expanded the idea outside of its niche (which was language teaching) despite the fact that most of its core propositions hold true for nearly all fields being taught across universities today. This is an attempt to, at best, set up such a teaching method1 or, at least, lay out some ground rules for teachers to follow so that they do not forget the purpose of their occupation while they—as they should—explore exciting new methods of teaching that sprout and grow with the times.

The teacher is an enabler, not an end-all. It is not in the teacher’s place to instruct and seek obedience; rather it is to ensure that students can themselves evolve with the teacher shaping them, guiding them and catalysing the process. These words are more present, physical and immediate in their nature than their floweriness might suggest. And it is with this in mind that I expand upon the Dogme Teaching ideas from the early noughts. Lastly, it is worth mentioning here that over the course of reading about, understanding and building upon the Dogme Teaching method it became clear to me that, besides the name, it shares nothing with Dogme filmmaking manifesto; also any development atop this method that we will be making presently will leave you with an set of ideas that go quite far from the letter of the original while keeping the spirit intact.

There are three main ideas underlying Dogme Teaching: one, that teaching must be primarily conversation-driven; two, that teaching must be materials-light; and three, that learning happens through emergence rather than acquisition. It may be hard to see how these apply outside language teaching but they form wonderful precepts if we give them some free rein.

Using multimedia is all the rage these days, and with good reason: visual learning is known to be more effective than auditory or other forms. Indeed this is why blackboards were originally used; they allowed writing down—visually representing information—which was as much as could be done dynamically in classrooms (besides charts perhaps) in the days before electricity came into our lives. The fact that we still use it today is testament to its everlasting nature.

The fact that most see multimedia as a replacement to the chalkboard is worrying. The only legitimate reason to use multimedia is to exhibit something that is otherwise too complex to produce or describe, such as brief videos of phenomena, structures of organs, large scale organisational charts and so on. Simply using slides to list out points is far less effective than actually writing them out on the blackboard because the fact that things are happening in realtime on the board2 right here and now helps students connect to and absorb the idea—and remember and recall it—much better. This is what comes of the first two ideas: conversation-driven teaching and an approach that sees justified use rather than the overuse of support materials.

The idea of emergence versus acquisition is something I had been practising in some form in my own teaching without explicitly labelling it as such. For instance when someone asked me a question in class rather than answering the question I would nudge them with little clues towards the answer until they came up with it themselves. This was incredibly effective. Not only do students get a surge of confidence and encouragement (which so many classrooms lack so direly) they also tend to remember it as a result of the question–answer session becoming an experience rather than a tennis match.

Whether you are the sort of teacher who encourages questions interrupting a class or prefer questions at the end3 making the the entire class an experience led by the teacher but built and driven by students is always a great way of teaching. In short, this is emergence as opposed to acquisition where you tell them something and ask them to keep it in mind.

This essay started out as a piece on using technology effectively and sensibly in the classroom. Although I digressed, addressing the issue as part of a larger manifesto not only seemed more worthwhile but also promised to be more meaningful in the long run. This is the old Dogme Teaching manifesto expanded beyond language teaching and improved to accommodate newer classroom tools.

That learning happens through conversations and not one-directional speeches is a central idea of Dogme teaching. However, outside of languages, most subjects do in fact require certain periods of lecturing, where new ideas are put forth before students can begin to discuss them at all and immediate usage is not a realistic possibility. The idea is to strike a balance. Every week try to make space for tutorial sessions that are dedicated to open discussions rather than teaching alone.

In short, while one-way teaching is sometimes necessary always try to build a dialogue with every student, push them into conversation if necessary, and have some form of discussion in class.

In other words, construct ideas with students so they can get their hands dirty while they learn it from first principles; do not just give them ideas just because those ideas already exist.

One of my favourite beliefs in the Dogme method is that understanding develops from within the learner and is not transferred like a piece of information. This adds on to the previous point and is more a thought to appreciate and keep in mind than a method to adopt. One of the ways of ensuring this happens effectively in the classroom is to focus on components of a lesson. By piecing a topic up into small concepts that all tie together, a student’s understanding of one or few of the concepts can dramatically improve their chances of understanding the rest of the concepts and, in turn, of the entire topic.

In short, focus on making students an integral part of discovering ideas anew in the classroom rather than presenting it to them as existing topics from a canon; focus on topics as palatable chunks rather than huge volumes to better achieve this.

4. Give students a voice

One of the things I used to make clear in my classes, rather explicitly, was that students need not agree with what I say. They were allowed to, nay encouraged to, disagree and debate topics until they were convinced one way or the other. In physics the debate is not so much about right or wrong but about fully understanding a mathematical manoeuvre, a physical interpretation etc.

In other fields similar needs exist to varying degrees but the idea remains the same: give students a voice. You may need to coax them to speak up (there will be some exceptions) but let them know they can communicate freely and comfortably. The thought of being able to express themselves freely empowers students greatly.

Keep in mind that things you offer your students, be it handouts or copies of presentations or even presentations exhibited in class, are all in addition to your teaching, not replacements for it. They are also in addition to your students’ core learning material, not a replacement for that either. The central idea here is that technology must be used to add to the learning process, not for its own sake.

The use of technology can reduce that of paper. However this is easier said than done unless you are fully independent in your teaching; in most other cases your institution will have to take a leading role in this and I have had a bitter experience in this regard myself. Yet there are things you can employ within your class too, such as having assignments e-mailed rather than written, which is something I have had some success with and which received a lot of positive feedback from students.

In other words, use as many support materials you need, no more, no less; there is a thin line beyond which such materials and technology go from being supporting to being distractive—tread carefully.

6. Reading materials have their place

One of the criticisms that Dogme Teaching originally faced was that it shunned the use of textbooks. Perhaps it did make sense to some extent in language teaching but shunning textbooks is hardly convenient in other fields. Indeed textbooks have their place much like any other reading material from websites to articles to magazines to general reading books. Textbooks are, as they have always been, excellent starting points.

Dogme teaching must not encourage textbook reading in class; it must be a purely off-class activity. But its benefits can be drawn inside the classroom by simple time-saver solutions like quickening the laying out of an idea (since students could have simply been assigned this as a reading assignment) and allowing the time saved for actual conversations and discussions. The same is true of all reading materials.

In short, shun textbooks in class but let them be teachers outside the classroom; let reference and reading materials become boosters of efficiency so that repetitive and expositional work can be left to them while you focus on active discussions and enhancements during your teaching rather than using external resources as skeletons.

Everything expressed in class is either a fact or an opinion. Opinions, while they have the right to thrive in the classroom, must be marked clearly as such. There is nothing wrong or unnatural about students taking to their teacher’s perspective; this is human and is part of the deal of choosing to studying in an institution or under a certain professor.

However, Dogme Teaching will ideally have developed the student’s presence in communications and the student’s thinking enough to ensure that if they do fall in line with their teacher’s opinion they will have done so of their own will and, additionally, that if they change their mind later they do so sensibly and informedly.

That is to say, informed opinions and facts have a right to co-exist in the classroom and acknowledging possible bias is an essential step since elimination is nearly impossible; but students must be encouraged to think for themselves and follow or oppose an opinion on fair grounds—after all there is nowhere they can go later in life where opinions will not be constantly echoed around them.

Add to the conversation

This manifesto is by no means complete. It is, if anything, a stepping stone for a more exhaustive version that can only be framed with input from teachers from various fields.

There is a lot more I would myself like to add to the manifesto but am weary that beliefs may end up outnumbering methods. Dogme is a teaching method after all. And it must remain, in this new form, something that applies to all fields with nothing too specific about any thereby making for an excellent platform for foundational teaching to develop on.

If you are a teacher or a student or anyone who can add to this discussion do get in touch with me via Twitter (DM preferred) or e-mail with follow-ups.