Knowing what is enough, working on traction, and developing the beginner mindset can enrich our life. 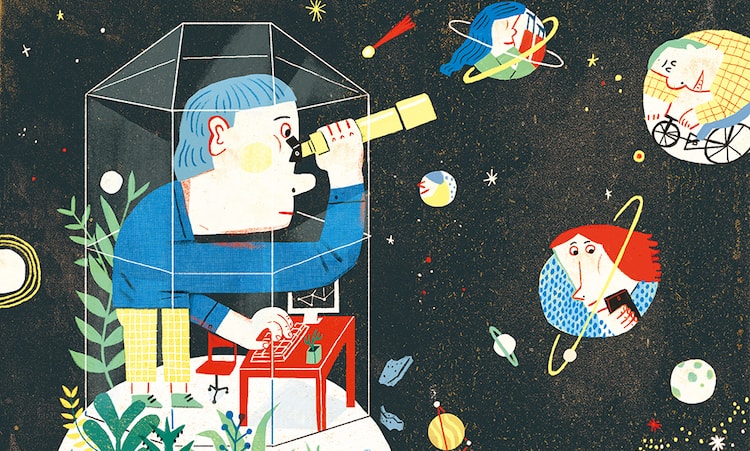 ‘Better living’, as interesting as the idea sounds, is hard to define in a manner that would please everyone. For my own part I think of it as living happily and productively, nothing more. And to that end I have of late been entertaining three ideas in my mind that I now feel have matured enough to put to words. In short, defining what is ‘enough’ for us, identifying traction, and developing the beginner mindset are three key ways of ensuring ‘better living’ — at least in my humble opinion.

As a practising Stoic stumbling through the philosophy on a daily basis I do not find myself quoting Diogenes often. Diogenes was a Cynic and their school of thought differed from that of the Stoics on a fundamental level. Yet the story of Alexander meeting Diogenes has always interested me: when Diogenes the Cynic was sunbathing one afternoon the great king Alexander supposedly visited him and asked if he wanted anything (I get the feeling there is more to this story that is lost in history). I will let Plutarch continue with the rest of the tale—

…when that monarch addressed him with greetings, and asked if he wanted anything, ‘Yes,’ said Diogenes, ‘stand a little out of my sun.’ It is said that Alexander was so struck by this, and admired so much the haughtiness and grandeur of the man who had nothing but scorn for him, that he said to his followers, who were laughing and jesting about the philosopher as they went away, ‘But truly, if I were not Alexander, I wish I were Diogenes.’ and Diogenes replied ‘If I wasn’t Diogenes, I would be wishing to be Diogenes too.’

Diogenes obviously comes off as an arrogant man in this story. (There are other versions of this tale as well and Diogenes appears arrogant in every single one of them.) Needless to say, I prefer the Stoic approach to this myself: the Stoics believed in knowing one’s preferred indifferents, those things which one might possess—intentionally or otherwise—which one can enjoy without dependence or fear of being crippled should it be lost.

What this comes down to is knowing what is enough. This does not mean giving away all of one’s possessions, rather it means gaining better perspective about what one does have and deciding educatedly from that point on. Diogenes needed nothing from Alexander because he had ‘enough’. The trouble with a lot of people is not knowing what enough is, which is not the same as wanting more: one can entertain the idea of a life with more while still living a perfectly content life in the present with what one has. Simply put, not knowing ‘enough’ means being a slave to desire to the point where one cannot progress without first getting more — a vicious cycle that never ends.

True story, Word of Honor:
Joseph Heller, an important and funny writer
now dead,
and I were at a party given by a billionaire
on Shelter Island.


I said, “Joe, how does it make you feel
to know that our host only yesterday
may have made more money
than your novel ‘Catch-22’
has earned in its entire history?”
And Joe said, “I’ve got something he can never have.”
And I said, “What on earth could that be, Joe?”
And Joe said, “The knowledge that I’ve got enough.”
Not bad! Rest in peace!”
Kurt Vonnegut

This also brings to mind a story involving Joseph Heller, the author of the wonderful book Catch-22. Kurt Vonnegut wrote back in May 2005 for the New Yorker about Heller, describing how, when the two were at a billionaire friend’s party, Vonnegut asked Heller how he felt about the thought that their host probably made more in a day than Heller’s magnum opus would make in a lifetime. Heller replied that he had something their host could never have: the knowledge that he has enough. This idea is key to a better life for one simple reason: it clears your mind. Knowing what is ‘enough’ helps you be grateful for things you have and lets you pursue things you want with clarity without blindly falling for them.

The second thing is handling distractions. By ‘distraction’ I do not refer solely to what people usually think about when they hear the word. These are more than just entertainments or any of the various forms of addictive, habit-forming activities that give people a dopamine rush. Some of the ideas I discuss under controlling distractions come from an interesting book called Indistractable: How to Control Your Attention and Choose Your Life by Nir Eyal. The argument is that acknowledging what we think and feel is the first step towards overcoming obstacles that make us unproductive.

While the categorising is simple enough, choosing the tasks one intends to do is often neither simple nor straightforward. From this stems the ancient Greek idea of Akrasia. Simply put someone who is akratic lacks command; more specifically, this translates to a lack of self-control or, even more specifically, akrasia is one’s tendency to act against one’s better judgement. Plato asks if one knows an action to be the best course to take, why would they not do it? Why, in other words, do we watch that one extra show on Netflix knowing that is not the best course of action?

Nir Eyal argues that the way to overcome this is not simply to make up one’s mind — a brute force attack such as that would prove to be feeble. Backed by lots of research he says it is futile to rely on will power, rather we should be employing methods that help make us more conscious of our choices. This is a long term approach of sorts.

Sensations that lead us towards distractions often crest and subside; they rarely stick to an eternal upwards path. We need to take time and identify these, a process called ‘surfing the urge’. Literally, take time off from whatever you feel like doing, even if it is just ten minutes; and in those ten minutes let it sink in that this is what you want to do, and then, at the end of ten minutes, do whatever you want — even if it still happens to be the most distracting of choices.

This seems simple but is quite a powerful approach. By pausing for ten minutes before starting that one last episode on Netflix we are explicitly acknowledging our action — whether it is traction or distraction — and we are letting it sink. It is highly possible, says Eyal, that in those ten minutes we realise better and change our mind. But it is equally possible that we do not. Either way, we are now more aware of our choices than we were before and this translates, in the long run, to a habit of making better choices consistently or at least of being able to control and brace ourselves against poorer choices more effectively.

It is time to learn one of those oddly specific words from the Orient that refers to something I have noticed for an incredibly long time with my own journeys in learning. Shoshin loosely translates to beginner’s mindset. I have often noticed when I start to learn something new that I have an immense openness to the learning process, but this fades over time. It never disappears entirely, but neither does it stay the same after a while as it was when I started out. This is also not a drive to learn: the drive never disappears. This is simply an openness to ideas. Seeing how a word like Shoshin exists I cannot help but think this is something lots of others experience too.

To be productive and in turn to live a better, happier, healthier and more meaningful life (in my opinion — need I say it anymore?) the third approach is to try to develop Shoshin. Start looking at things — really looking at things — like you do not already know them. Live through questions, ask questions, look stupid, admit ignorance and focus on learning something new all the time. Relax from the pressure to have all the answers before taking a single step because then you will never take any step ever. Every good book ever written was written by a learner sharing their experience, never by a master claiming to know it all.

Call it divergent thinking, unlearning, adaptability or whatever else, putting the effort to constantly empty your mind before doing something and building up the enthusiasm for the task we are about to do can have a huge impact on how we work.

There is another way to look at all this: as kids we were open to more possibilities than we are as self-perceived ‘experts’. For some years now I have referred to this with myself as ‘aiming for the ideal’. This also brings to mind Alain Souchon’s song Foule Sentimentale in which he sings ‘On a soif d‘idéal’ — we are thirsty for the ideal. As we grow we are told more often about the impossibilities than about possibilities which makes us unknowingly build a walls and moulds around ourselves which in turn forces us to fit everything we come across into these familiar moulds. Break free.

One simple method to consciously overcome this is to improve our listening skills in a particular way: the next time someone is talking and they say something you already know, hold yourself back from pointing out that you are aware of it. Instead listen and build on it, reciprocate and drive the conversation forward with the hope of learning something. This way you will not end up curbing your own learning and self-improvement by ending conversations with the explicit acknowledgement that you are already aware of something.

This is perhaps what feels easiest among the three ideas discussed in this essay but its simplicity is deceptive because we are, as humans, predisposed to showing off what we know. This is not negative; our society is built to reward our capabilities and skills more than our enthusiasm to learn and we are eager to score points in this regard. Get over the mind block that you know something if you want to learn something effectively.

I doubt the reason for this is arrogance in a majority of cases although it might appear like that on first glance. Perhaps most of us are simply enthusiastic when we recognise that we already know something; equally, perhaps we learn over time to recognise and point out that we know something. With this we inadvertently come in the way of our own learning.

A follow-up to this essay is in the works and in it I expand on the idea of embracing the beginner’s mindset by simply slowing down in life — by which I mean hustling in a planned and intentional fashion, not being lazy. Until then these three powerful ideas should provide ample food for thought: by defining ‘enough’ we develop contentment and clarity; by identifying traction we slowly take control of our choices and, in turn, our life; and by adopting the beginner’s mindset we ensure that we can make the most of the time we spend doing productive things, be it work or learning or anything else. The end result would undoubtedly be a better, happier daily life.