Animal sports should be regulated or stopped

Local animal sports abound the world over but are hardly the cultural standard-bearers they claim to be. 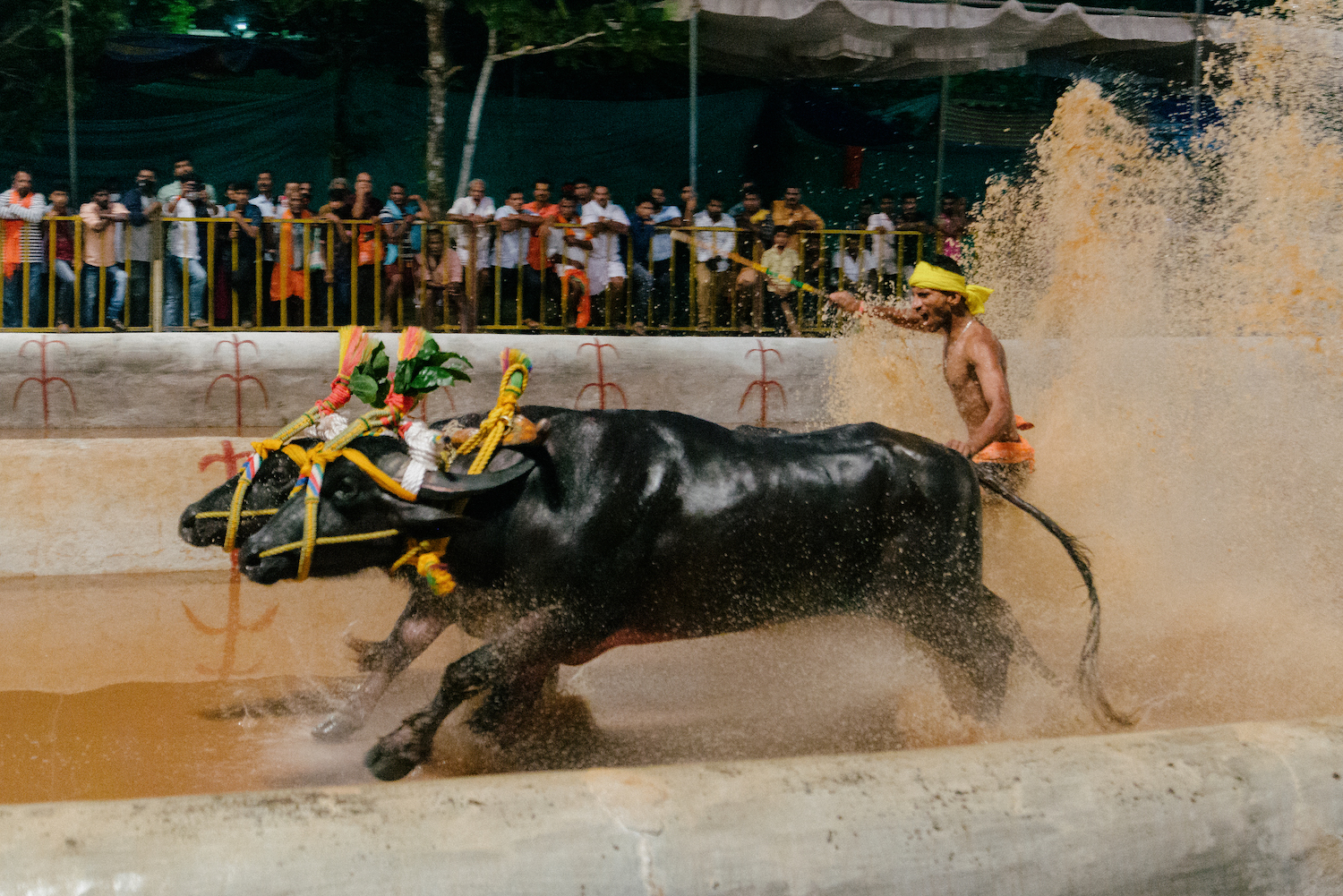 Around 1200 AD we believed the earth was at the centre of the universe, that smoking was a great decision, that razing cities to the ground was a sign of power and that racing cattle through tough, slushy terrain was fun for everyone. Today, we know the earth is not at the centre of our system; we know that smoking is severely injurious to health; we no longer think razing cities to the ground epitomises power; we think racing cattle through tough, slushy terrain is fun for everyone.

Last weekend I had the misfortune of watching buffalos sprint down a slushy track. In a sport called Kambala that supposedly dates back a thousand years, farmers race a pair of buffaloes down a track filled with a foot or so of slush. The slush is supposed to resemble a paddy field and the whole act is believed to please the Gods.

But of course, as in so many other events in societies across the world, the Gods are merely an excuse. Kambala in particular is an old practice of the Karaga farming community in India’s Karnataka state. Once upon a time, when their lives were limited to farming and cattle-rearing, a recreational activity like racing one another’s bull was prime entertainment. Over time it legitimised itself into a sport. Today, for the most modern reasons as we shall see presently, the so-called sport still goes on, having seemingly evolved into the most other-worldly affair.

A thing of commerce

As I approached the fields over which the local festivities take place I was taken aback to notice it looked nothing like the usual serene, calm lakeside fields we have known it to be all year-round. A thousand people had gathered. This was mostly a village fair, with merry-go-rounds, giant wheels and the whole nine yards. There was a dais with a self-proclaimed trendy lad going on about something inaudible because of how loudly the speakers were blaring, and there were cars parked everywhere, from rickety old models no longer road-worthy to the most modern BMW SUVs.

On the track, the racers whip the buffaloes and prod them with sticks. They have to be careful, though, or the buffaloes could take off. It takes a dozen men to co-ordinate and hold a pair of buffaloes in place.

The road leading to the lake was lined with poles propping up massive posters, giving it the appearance of an ugly boulevard. One advertised a local business while another advertised an upcoming film; but every other poster was the face of a politician and his many well-wishers who no doubt (as is the norm) spent their own money to set up the gaudy posters. This was a squarely a commercial enterprise now. The buffaloes drew in the crowds, but everyone else got to take home a slice of the cake.

The peculiar aspect is that fairs are common elsewhere too. For example the famous city of Mysore, a couple of hundred kilometres away, has also run a state fair for centuries now—even lasting a few months—but without any such animal sports. It just goes to show that fairs can be commercially viable without mute animals as attractors.

In all fairness these buffaloes are supposedly taken care of better than most humans can afford to in the country. The affair with Kambala is not a local one alone anymore.

A stone’s throw away from where I now stand armed with my camera and awaiting my first sighting of a racing bull, lies a 10 foot deep, 40 square-metre swimming pool where a few of these buffaloes spent a few hours daily. These buffaloes run for a ‘team’, and win massive cash prizes when they win. The person who owns them and funds their training (of which the swimming pool is an integral part) lives 2,500 km away in Dubai. It costs him one-and-a-half million rupees a year to run the training regimen for his buffaloes. The average Indian earns 200,000 a year, or just 13% of what it takes to bring up those prized buffaloes.

On the track, the racers whip the buffaloes and prod them with sticks. They have to be careful, though, or the buffaloes could take off. It takes a dozen men to co-ordinate and hold a pair of buffaloes in place.

Kambala takes many forms but here is a description of what I watched: There exist two parallel tracks joined to each other on either end with a tight curve. A parapet both marks them and acts as a container for the slush that fills the racetracks. While some forms of the event involve two pairs of buffaloes racing head-to-head on either track, others—including the one I watched—involve individual pairs racing down a single track in a time trial while other participants use the other tracks to line up for their turn.

While they wait, the buffaloes (which are already drenched in what appeared like slush-water) are sprayed on with more water possibly to prepare them for the spray of slush they will face when they soon being their sprint.

Most notably, and most inhumanly, the ‘riders’ of each buffalo pair in this Kambala were not running along with their buffaloes but were instead perched atop a plough-like device attached to a harness tied through the buffaloes’ nostrils. This meant the poor beasts not only had to fight the slush but also drag the added weight of their ‘rider’.

Back in the day these riders were local farmers who often owned their bulls. Today, they are professional riders paid handsomely (think 2.5 times the average Indian’s annual salary) to train all year-long often while coupling their training with their farm duties. And for around half the year they participate in Kambala races across the region, looking to win them all.

By no means do I intend to single out kambala. It just happened to be the start of a much bigger argument I intended to make, given that I happened to visit and watch it. Furthermore, this is by no means a claim that all buffaloes involved in kambala or other animals in animal sports like it are ill-treated. There are surely many who care dearly for their animals and race for fun if they choose to rather than to beat victory out of their buffaloes.

The bull-running in Spain and the cockfighting in China and the Cow fighting in Switzerland and the Camel wrestling in Turkey all make Kambala feel tame by comparison.

First, let us get the most obvious question out of the way: does my visiting a kambala signify my support for it? Had I paid a fee to participate or watch, one could make that argument, but the whole fair was free of cost. My presence gave the organisers no monetary benefit whatsoever. If anything, it resulted in this essay written in a tone that definitively questions their very existence.

Second, as I pointed out earlier, kambala is no loner in this space. The bull-running in Spain and the cockfighting in China and the Cow fighting in Switzerland and the Camel wrestling in Turkey all make Kambala feel tame by comparison. After all, no buffalo race ends in one dead party. The real question here is why we need this form of entertainment at all when we have so many other forms of it in this day and age, not the least of which involves millionaires pretending before a camera.

Jokes apart, we need to ask ourselves if watching animals is fun or watching animals having fun is fun. When dogs roll around on the lawn or when yours and your neighbour’s dogs chase each other, they are technically involved in a form of sport and we can always let them lose at four every evening to watch them run if we feel like it. But why build a sport out of it that puts our own desires above the feelings of unwitting animal participants. Perhaps regulate the training and daily care of participating buffaloes both on- and off-season. Better yet, have a buffalo show instead where farmers could come from far and wide and show off how healthy, happy and content their buffaloes are.

From your lavish penthouse in Dubai, how could you possible care what your buffaloes feel more than what you want them to accomplish for you come November every year?

As someone whose family once got a cow to plough our farm but then decided to never resort to that again and bought hand-held mechanical ploughs instead, there is no fathomable perspective from which I can support animal sports that indulge in cruelty of this sort. However, in the end what really moved me was a silly little question that was nonetheless important to me: did the buffaloes look happy?

I could not swear to it.