An unforgettable, raw and meaningful work

Book The unbearable lightness of being

Translation From the Czech by Michael Henry Heim 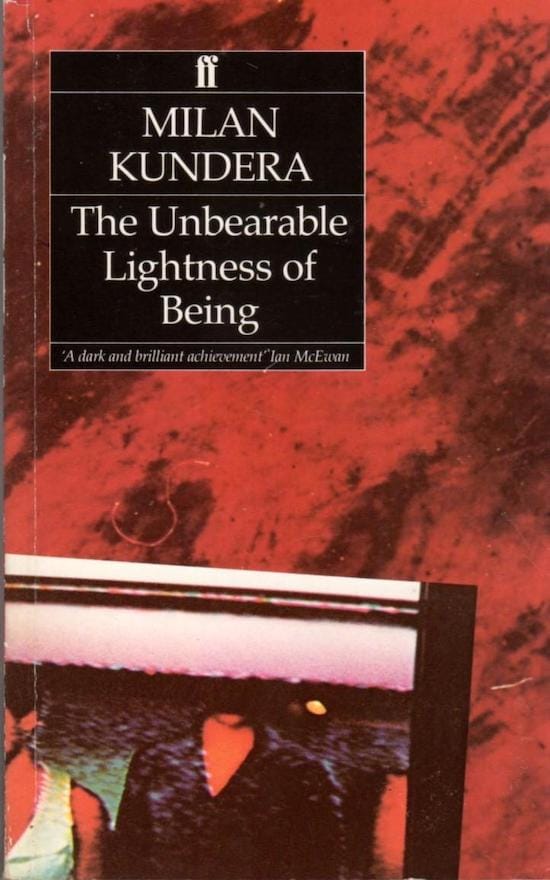 This is what the finest of wines or the most masterly of abstractionist paintings would look like if they were a novel.

Because I had never quite gotten around to reading this book for a good seven years, it had turned into a mysterious fascination for me—a book that I had come to love and had grown biased towards. Despite my best intentions, my review may similarly be biased; consider this my forewarning.

The unbearable lightness of being is Czech author Milan Kundera’s masterpiece that meshes philosophies on living with the interconnected lives of four people, rife with art, politics and sex. This book is fiction, no doubt, but it is philosophy before fiction. Read as fiction alone, this book feels like a series of romps and messy lifestyles of unsympathetic people. But read with the background of the philosophies Mr Kundera peppers throughout his book, these stories suddenly become a lot more than mere descriptions of actions. They become a study of intentions, effects and, on some level, humanity itself.

...metaphors are dangerous. Metaphors are not to be trifled with. A single metaphor can give birth to love.

Every other sentence in this book pierces you through either the heart or the head. The characters are singular in a way that no reader can hope to fully recognise with any of them. Nobody is clearly the protagonist. An overarching discussion exists of the heaviness and lightness in life: does responsibility make existence heavy or does it make it light? Similar questions are then asked about lots of things, often things that are twisted into submission elegantly into a neat philosophical context. Here, for example, is the novel’s take on burdens in life—

The heaviest of burdens is … simultaneously an image of life‘s most intense fulfilment. The heavier the burden, the closer our lives come to the earth, the more real and truthful they become. Conversely, the absolute absence of a burden causes man to be lighter than air, to soar into the heights, take leave of the earth and his earthly being, and become only half real, his movements as free as they are insignificant.

The way that last sentence suddenly makes you question if how great you were feeling about the thought of being ‘lighter than air’ is in fact all it seems. Is it worth it?

Still, reading this book as merely a philosophical treatise does it little justice. Although the author himself decries the typical approach novels take to making their characters believable and realistic (‘It would be senseless for the author to try to convince the reader that his characters once actually lived’) the presence of the five key characters of this book helps ground its philosophy beautifully.

The moment someone keeps an eye on what we do, we involuntarily make allowances for that eye, and nothing we do is truthful. 

There is a sense of connection to the events in the book, but not by familiarity. The objects in the story feel tangible and the flexible passage of time feels deeply satisfying. Mr Kundera plays with the world like a potter toys with his passion project. He is unbound, flies freely, weighed down by the philosophy but made light by his dogged insistence on grounding all discussions in the lives of his five characters.

A particularly beautiful section picks up a discussion on vertigo, an idea that plays an important role in redefining our understanding of the characters in this book. It also jolts us into taking a second look at everyone and everything around us. Like so much of this book, it makes us question our world but, despite its firmness, refuses to bind us to its outlook. ‘What is vertigo?’ asks Mr Kundera as he narrates the story to us. The answers to his questions, it becomes clear to the reader right at the start, will come soon after the questions themselves—

What is vertigo? Fear of falling? Then why do we feel it even when the observation tower comes equipped with a sturdy handrail? No, vertigo … is the voice of the emptiness below us which tempts and lures us, it is the desire to fall, against which, terrified, we defend ourselves.

And so he goes on to talk about the entire life of one of his characters and how they experience vertigo at several key moments in their life.

The book is not filled with illusions of grandeur—sometimes it hurries in the other direction. It is rich with tales told matter-of-factly, not elaborately like, perhaps, in Anna Karenina, a book that plays some role in this tale as well.

The unbearable lightness of being turned out to be quite a different book from the one I had expected and not in a bad way. It was way more engaging and much more grounded in reality and a lot less high-brow than I had expected. I have no complaints. From a less personal, more objective view, this book is great if you have an open mind, a taste for the unconventional, and a stomach for assertive, raw and piercing views on life itself. While you read this book you will not find it unbearable; when you close this book, you will not feel light. Both of those are good things.